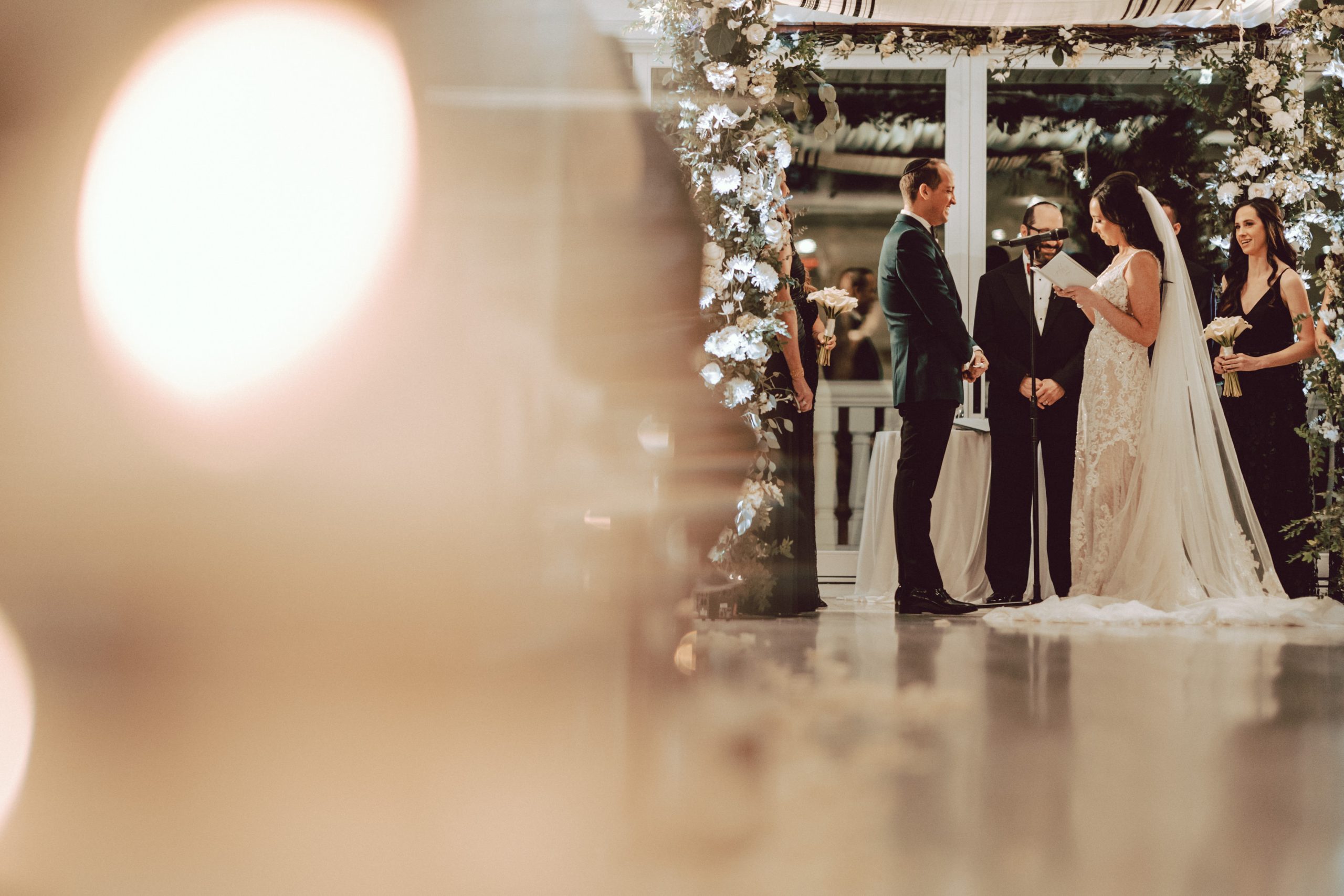 Well, first things first: Mazel Tov! Congratulations on your upcoming nuptials! At Crystal Plaza we are always thrilled to see couples coming together in love.

We have been lucky enough to host many Jewish weddings, with couples from all over the Tristate Area choosing to celebrate with us – for which we’re incredibly honored.

During this time, we have helped couples incorporate a few Jewish customs into their big days, some of which we are excited to share with you here…

The Ketubah is an important – but somewhat symbolic – ritual in a Jewish wedding. The Ketubah is a marriage contract of sorts, which outlines the groom’s responsibilities to the bride, including her protections and rights. It validates the couple’s commitments and vows to one another.

Before the wedding ceremony takes place, the bride and groom sign the Ketubah in front of two Jewish witnesses, who themselves cannot be blood-relations of the marrying couple. Finally, once the document has been signed, it is read to the guests during the ceremony.

Something to consider is having the Ketubah turned into a piece of art that can be displayed in the marital home as a beautiful reminder of the core values that bind your marriage together.

After the Ketubah has been signed, the groom will approach the bride and place the veil over her face. This is to show that he values her inner-beauty, and that they are two distinct individuals even as a married couple. The ritual comes from the Bible, when Jacob was duped into marrying the heavily veiled Leah, instead of the woman he loved Rachel. The idea being if the groom veils the wife himself, then he cannot be tricked into marrying the wrong person.

The Badeken can be a fairly emotional affair, since the bride and groom may not have seen each other – aside from through a veil – for 24 hours (or as much as 7 days!) until this moment. Make sure the photographer is primed and ready! 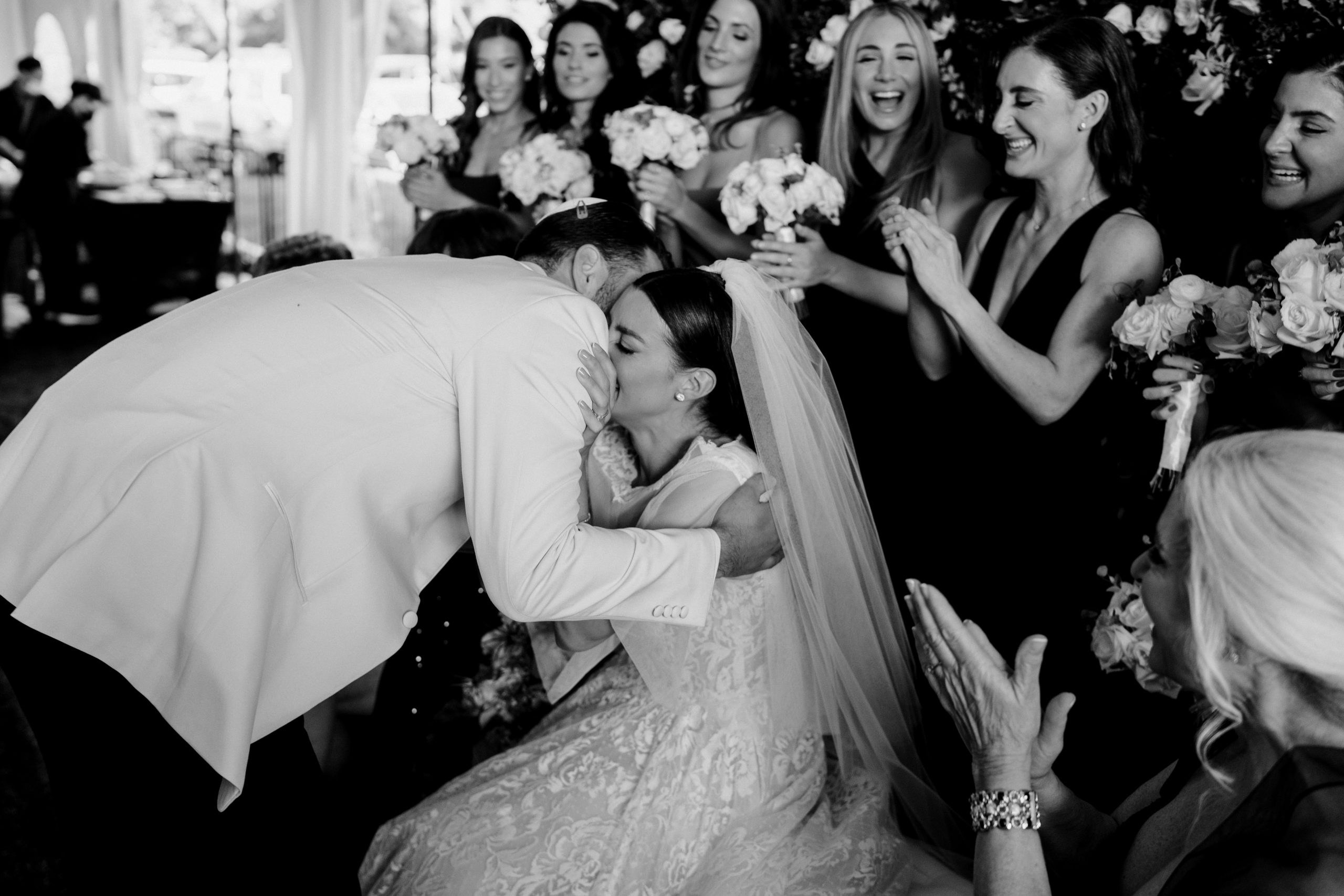 Anyone who has been to a Jewish wedding will know what the Chuppah is, even if they don’t know that they know!

The Chuppah is a canopy held up either by four poles or friends & family and tends to be the main focal point of the ceremony where the bride and groom come together to exchange vows.

The Chuppah represents the home that the bride and groom will build, with the family and/or friends that surround them reflecting the love, warmth and security that will make up the “walls” of their relationship.

Unlike non-Jewish weddings, both the bride’s parents AND the groom’s parents walk the betrothed down the aisle. First the groom and his parents, followed by the bride and her parents. Traditionally, both sets of parents will stand under the Chuppah, along with the bride, groom, and rabbi.

It used to be customary for the bride to circle the groom seven times, seven being a sacred number in Judaism symbolizing wholeness and completeness; however, today some couples prefer to circle each other three times before ending in a figure of eight. 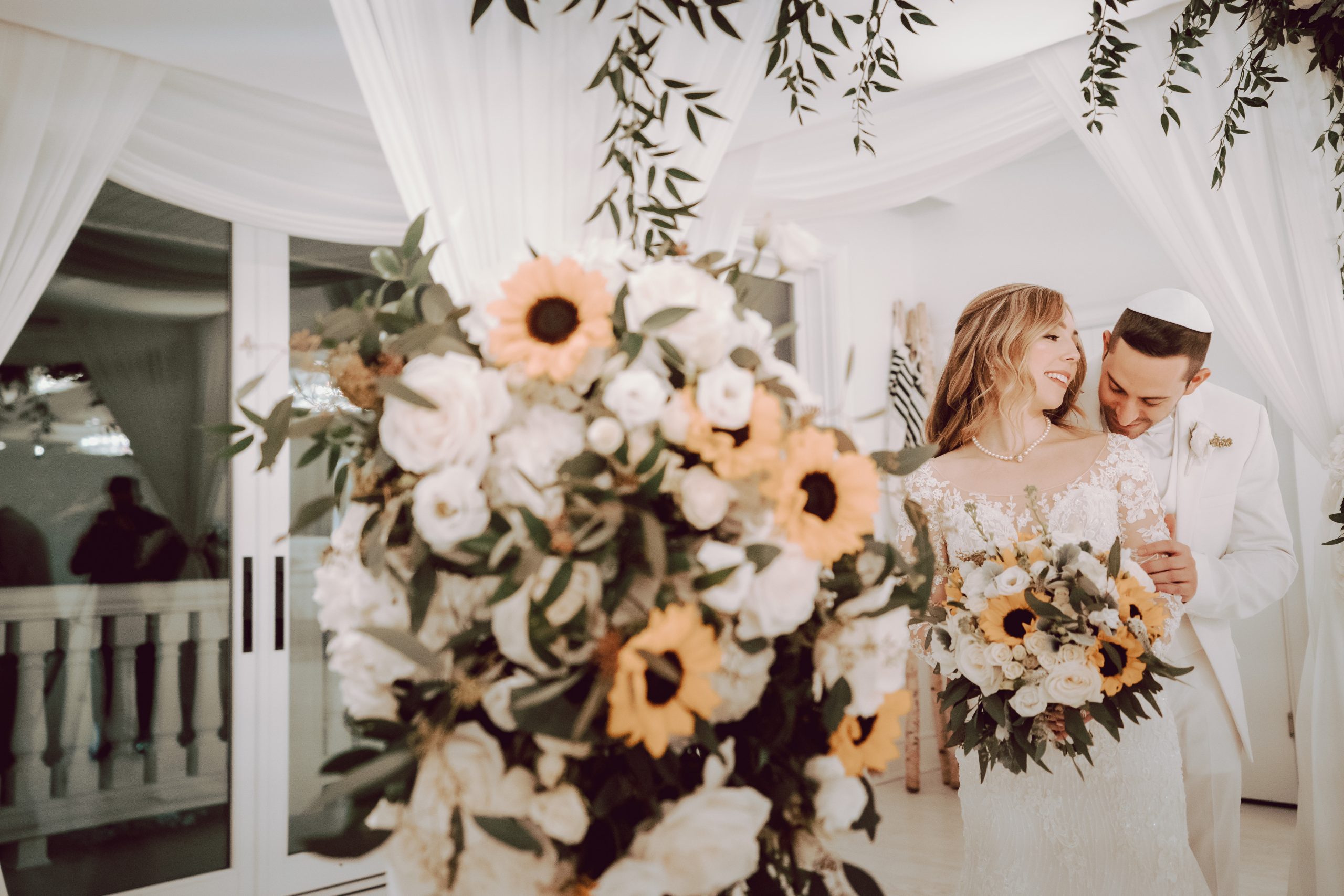 The Seven Blessings (Sheva B’rachot) stems from ancient biblical teachings and are often read in both Hebrew and English over a cup of wine (Chazan) that has been blessed by the Rabbi. The readings tend to be performed by friends and family, who are invited to join in the ceremony by the bride and groom, rather like readings made in non-Jewish weddings.

Focused on joy, peace, and the power of love, the blessings are a powerful celebration of the couple and Judaism as a whole.

Something everyone looks forward to – not least because it signals the end of the ceremony and the beginning of the PARTY!

As the ceremony winds up, the groom (or sometimes the bride and the groom) are asked to stomp on a glass that has been wrapped inside a cloth bag. As soon as the congregants hear the crunch of leather meeting glass, they shout out “Mazel Tov!” (Congratulations!).

Why break the glass?

There are a few different interpretations as to why the glass is smashed by the bridegroom. Here are a few of them:

Whatever the backstory, it’s a fun moment when everyone in the wedding becomes a participant in the ceremony.

Tip: consider keeping the shards of glass and having it incorporated into a memento from the big day – i.e., as part of a piece of jewelry or even in a Mezuzah to be hung in your new home.

For most, the breaking of the glass spells the beginning of the festivities. However, for the bride and groom, tradition says they spend at least eight minutes alone together, so they might reflect on their new relationship. It offers a wonderful moment of privacy between the newlyweds away from the spectacle of the ceremony.

Following the end of the wedding, the couple are led into a secluded room by their parents, who, having checked the room is otherwise empty, will discretely slip out. Once the parents vacate, the other witnesses from the Chuppah will stand outside the room for the previously allotted time.

On the inside, the couple will break their wedding day fast. This can be with something as traditional as “golden soup” of the Ashkenazi to delicious homemade cookies your Bubbe rustled up. The bride and groom might also exchange gifts, with the groom often giving the bride her wedding present: a diamond ring. This is also the moment when the blushing bride will put on whatever jewelry she had removed before the Chuppah.

If there was any lingering doubt as to whether it was time to party, this is dispelled in an instant when the Hora starts. The bride and groom are seated on chairs and lifted in the air, often while holding a handkerchief or napkin between them. All around them, guests dance in a circle (often men with men, and women with women).

There is always a fantastic moment when the first notes of the Hava Nagila (Come let us be glad) start to play and the congregation’s eyes light up before flocking to the dance floor to launch the bride and groom up in their chairs! 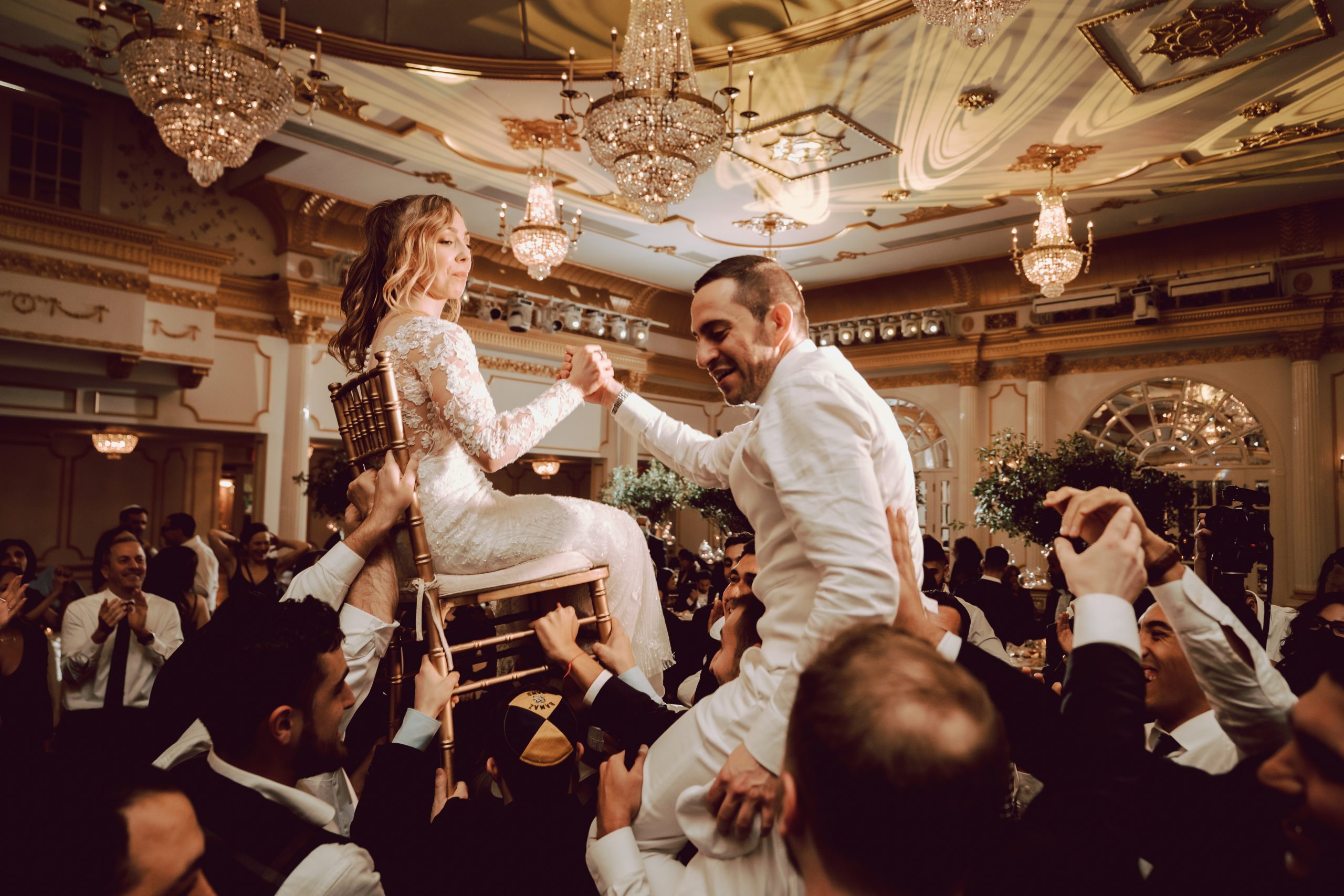 If you’re planning a Jewish wedding, be sure to consider the dietary needs of some of your guests, some of whom may keep kosher. But do not for a moment feel that this should mean you must compromise the quality of your meals.

At Crystal Plaza, we boast one of the few wedding venues in the Tri-State area that has a dedicated Glatt Kosher kitchen and kalim with Mashgiach Temidi. Under the supervision of Vaad ha Koshrus, Rabbi Yakov Teichman of Metrowest, our first-rate culinary team creates everything from brisket and pirogues to Pas Ysrael breads and Lubavitch meats, as well as other kosher fare including chargrilled ribeye steak, lamb chops and sushi platters.

So, there you have it, a by-no-means comprehensive checklist of elements you may wish to include at your Jewish wedding. We’re always thrilled to host Jewish (or any other religious or secular) wedding, so should you be searching for the perfect wedding venue to host your special day, please do not hesitate to reach out. 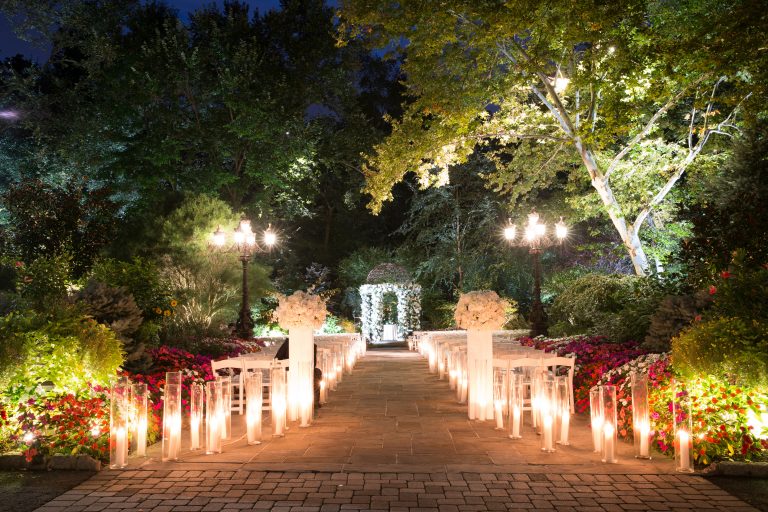 Crystal Plaza is widely regarded as one of the finest wedding and event venues in the US. Based in Livingston, NJ we offer impeccable white-glove service to meet the exacting needs of our guests